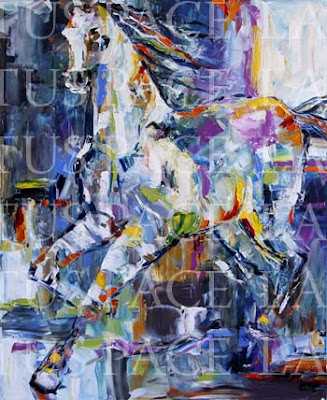 As I was reposting some of the sold contemporary Horse paintings from 2012, I realized I use wind often in the names... not sure why this one was called White Wind as there does not appear to be movement of wind in the background.  Sounds like a repaint might be in store.

Are there times you would like to 'repaint' a situation or words you have spoken. I know I have regrets on several occasions.  I am pretty careful about not hurting people's feelings with hurtful words in anger, but there have been times that I just simply gave in to my frustration. It takes a lot to push me to that edge, but unfortunately I have not just fallen off but jumped off.  Apologies and forgiveness is the only route, but I have NO IDEA what to do when they are not accepted.

I pray for you that if you have miss-spoken that you will find it in your heart to ask for forgiveness and the person offended will be gracious enough to forgive and realize we are just human and sometimes we are all pushed to that point of hurt.

Posted by Laurie Justus Pace at 4:00 AM

Enter your Email to receive my Abstract Horse Painting Blog

Where you can find Laurie Pace

Visit my Daily Blog where I post new paintings and thoughts on my faith daily.