STORY OF THE PAINTED PONY

Laurie Pace's contemporary horse paintings is her own work, unique in style and exploration.  Every painting she pushes a little further to learn more. (see below) Her signature style of Painted Pony Pulls has been imitated but know it began with her in 2006.  Laurie's abstract color pulls and hints of horses in the color mix is unique to her as well. Laurie's newest style is layering of  oil glazes on birch,  followed by heavier layers of paint, creating a dimensional painting.

"An artist must learn to trust their inner creative being.  Their work must be unique to them and not to someone else. I struggled and painted and prayed endlessly as I tried several approaches and realized that I can paint realistically, I can paint impressionistically but my joy is in my palette knife and how I turn use it on my canvas."
The First Painted Pony was from a nude to a horse. Read more below: 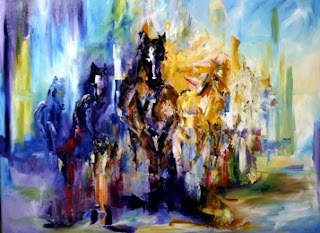 Dusk to Dawn 2006
When you buy a Pace painting you will have a unique piece of art that was NOT directly influenced by someone else's style...but it is Pace's own development and growth that brought it to life. The Painted Pony Pulls were brought to life in the summer of 2006 following a large gallery opening in NY.  She was visiting on the phone with another artist talking about painting something different.  From this point they decided in their own studios in separate states, they would paint a nude.  A few days later they exchanged images via the internet.  The other artist phoned Laurie laughing..."You put two left feet on your nude." Laurie was a commercial artist/illustrator by trade and that was a huge blow to the brain.  She took up her palette knife and began to scrap the surface of the canvas. It was heavy with wet paint. It was a large 30 x 40 canvas and as she worked she threw more paint on it and pulled in new colors abstracting the nude...and suddenly the horses were there. The first paintings were sold to a gallery in the UK and sold quickly. 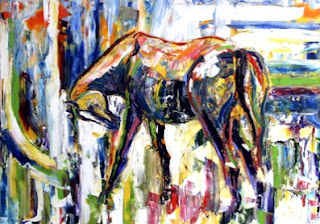 Grand Canyon 2008
Pace has been painting impressionistic horses for years...but this new way was pure abstract in form and implication... and there they were....the first painted pony pulls.  The next style that evolved was the pulling of paint in different directions on the canvas.... and then the carving of the horse and the actual defining the volume and shape of the horse, not just an outline, but a definite given shape.   It is the merging and blending of colors. It is the knowledge and touch that has developed from working in art for 50 years.  "What I paint is the result of my life experiences and no one can imitate what resonates from my soul through my palette knife." Laurie Pace 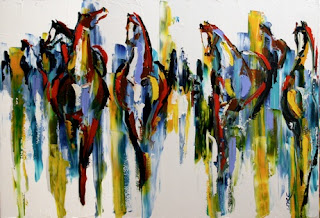 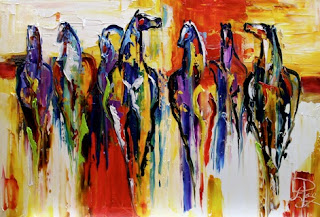 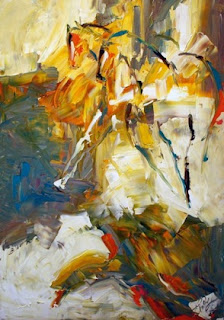 Visit my Daily Blog where I post new paintings and thoughts on my faith daily.